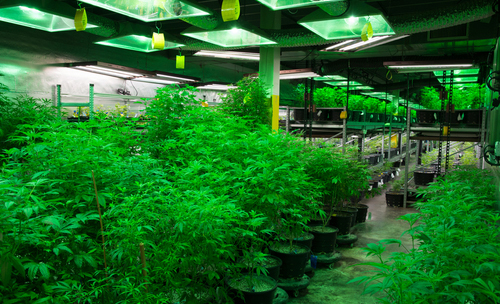 Ever since Colorado voters legalized recreational marijuana sales in 2012, there’s been much speculation about the effects of the marijuana industry on the industrial real estate market. Colorado saw a mad rush for grow facility space between 2013-2015, as producers ramped up for recreational sales beginning in 2014. The sudden demand put tremendous pressure on the market, resulting in increased rents and falling vacancies. This occurred at a time when the industrial market was already beginning to tighten due to Denver’s booming economy.

Since this initial onslaught, the demand for new grow space in Denver has virtually dried up. This is due largely to the City and County of Denver placing tight limits on the number of grow permits. As a result, the marijuana industry currently accounts for only 1.5-2% of the overall market, occupying approximately 3-4 million sq. ft. of industrial space in the Denver metro area.

According to industrial brokers, market dynamics are shifting yet again. The industry is maturing, with increased competition, consolidation, and the introduction of larger, more sophisticated growers. Many of the large-scale producers are now moving to areas with lower land and leasing costs. As an example, Pueblo houses Los Suenos, the largest grow facility in the U.S.; the southern Colorado city will soon be home to the U.S.’s largest hemp production facility.

With many smaller growers forced out of business, and the larger ones moving outside Denver, more industrial space is available. Luckily, the general demand for industrial space has been so high that overall market vacancy hasn’t suffered.

Hemp and CBD Picking Up the Slack?

The 2018 Farm Bill, which legalized the production of hemp (legally defined as cannabis containing less than 0.3% THC), created another boon to the marijuana industry, at which Colorado is in the forefront. People have used hemp for millennia for its fibrous strength, but the use of its extracted oil, known as CBD, has increased exponentially.

The CBD oil is used in tinctures, sodas, creams, and myriad other products which have become wildly popular; companies market these products as a panacea for seemingly every known human (and pet) ailment. CBD sales nationwide have increased from $108M in 2014 to $513M in 2018, with a forecast $1.8B by 2022.

According to Brandi Spencer, Managing Broker of RE 1313, who has considerable experience leasing marijuana-use spaces, new growers are not replacing the facilities vacated by grow operations. At first, it seemed hemp producers would re-fill the vacant space, due to an initial surge in interest for hemp production after the Farm Bill passed.

What’s Next for Colorado?

Colorado’s marijuana market has undergone many changes in the last decade; thanks to hemp and CBD, it’s undergoing another expansion. With it, the industrial market has adapted to these changes. How much pressure the CBD sector will put on the already tight industrial market is yet to be determined. Even if this sector doesn’t place significant additional demand on mid-sized industrial space (though we believe it will), the strong Denver economy will continue to drive higher lease rates and low vacancy.