The Metamorphosis of the Shopping Mall 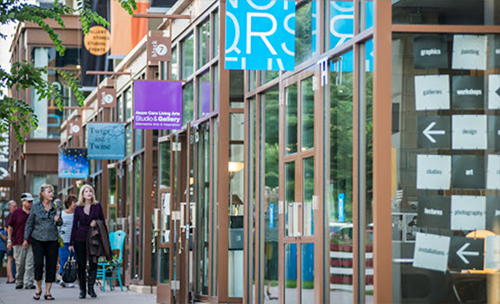 Since the first shopping mall opened in 1954 in Detroit, Michigan, the U.S. has seen an exponential increase in the number of malls. Over the years, as consumer buying trends have changed, malls have undergone an impressive metamorphosis themselves. Nationwide, creative developers, often in partnership with local governments, are transforming older malls into vibrant, new communities with unique neighborhood focal points. And Colorado has been at the forefront of this trend.

The Birth of the Mall

In the early 1950s, Austrian architect Victor Gruen conceptualized the modern “shopping mall.” While in Detroit, Michigan due to a canceled flight, Gruen decided to visit Detroit’s landmark Hudson’s Department Store. During his visit he came to the realization that despite the store itself being quite nice, it was located in a deteriorating section of downtown. Run-down city centers were a common occurrence across the country after the Great Depression and WWII, as veterans could purchase housing outside of the city center, for no money down. The transformative American suburban migration had begun.

Gruen reached out to Hudson’s leadership and explained that their customers were moving outside the city and so should they. He urged Hudson’s to embark on the creation of a suburban commercial development. This would allow them to be their own landlord, thereby also diversifying their business by becoming real estate developers and property managers. Lastly, this would give them the authority to pick and choose other retailers that would complement and enhance their core business, creating a first-ever synergy among retailers.

Gruen’s Northland Mall opened in 1954. It was the first of its kind, and the largest mall that had ever been built. It was a tremendous success, and was the genesis for what has become known as the shopping mall, and created a significant shift in consumer shopping habits.

Beginning around the turn of this century, shopping malls across America have been increasingly abandoned. These 100-500 acre, 1-million-square-foot-plus centers are being vacated rapidly, as one retailer after another closes its doors or downsizes dramatically. They leave behind enormous, desolate buildings in the center of bustling neighborhoods. As many of the properties are falling into bankruptcy, creative real estate entrepreneurs are finding tremendous re-development opportunities. As the locations were originally chosen by indicators such as transportation, accessibility, and nearby residential neighborhoods, today these malls are located on prime real estate.

Transformation Across the Nation

Innovative and responsive developers and business owners are observing these trends and making moves. Nationwide, shopping malls have been repurposed into a variety of different uses, and the options seem endless.

As an example, big companies like Hewlett-Packard and Google see these already existing “communities” as opportunities to create campuses and offices for their companies. An iconic mall in Rhode Island has converted their real estate into micro-apartments while also keeping a mix of local businesses and conveniences such as salons, coffee shops, restaurants, and other “lifestyle” businesses. Tennessee transformed one of their antiquated malls into an education and sports venue; supporting their local hockey team, making space for a community college, and adding a public library.

In some cities, one might find that large portions of a shopping mall converted to appeal to a strong demographic of a population. One might find a mixture of ethnic food markets, clothing apparel, restaurant equipment, and perhaps event spaces to hold cultural parties and gatherings.

Another recent trend is the ghost kitchen. This model transforms large, empty spaces into professional, food preparation facilities providing dining-less restaurants. This allows food concepts to sell their menus, by delivery only, without having the expense of brick-and-mortar and additional staff.

Simon Properties has taken a vested interest in the tenants in their portfolio. In 2016, Simon and mall owner General Growth Properties, now owned by Brookfield Property Partners, saved Aeropostale from bankruptcy. Today, they’re at it again, making an $81 million offer to buy Forever 21. Owners are becoming players in their own game.

Colorado has been a trendsetter in mall transformations; more than 60% of the malls in the Denver Metropolitan area have been, or are currently being repositioned.

The use and intention of traditional shopping malls has shifted. Historically, they held clothing, apparel, and other retail choices. Today, mall owners are repositioning their assets to go far beyond retail, and adjusting to the needs of the community. By providing a welcoming new mix of uses, malls are producing a cultural win, and re-establishing a significant source of tax revenue.