The subject of affordability in Colorado and its impact on commercial real estate has been bubbling to the surface over the past few years in numerous industry articles. The remarkable increase in single-family home prices and apartment rental rates during the last ten years are becoming a cause for concern, especially when compared to median household income.

And during the recent Colorado Real Estate Journal’s Office Summit and Expo Conference, more than one panel discussed the topic of the cost of living in Denver. The commercial real estate market has cause for concern as reduced affordability may hamper Denver’s future ability to attract Fortune 500 and rapidly growing companies to locate their headquarters, or regional hubs, on the Front Range. 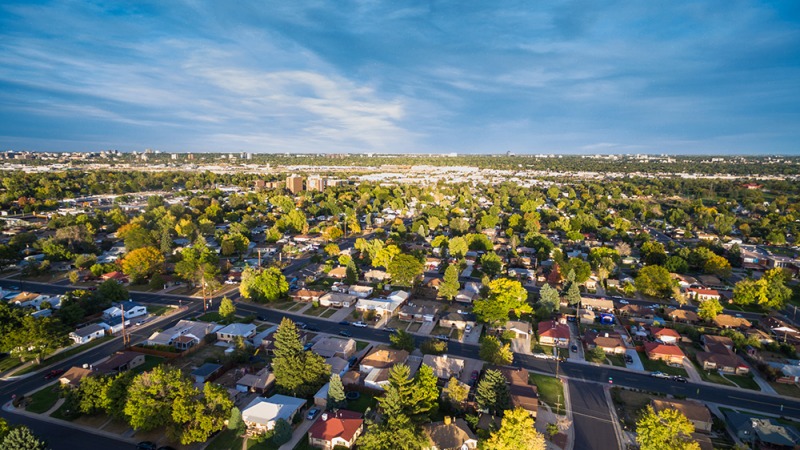 These discussions centered mainly on companies’ ability to attract and retain talent in light of the current cost of living when compared to other markets. If a company is considering relocating, a major consideration is whether or not their employees will be able to afford to live in the selected market, given the salaries they are willing to pay.

Of course, top-tier employers bring  benefits to a region as the higher-paying salaries percolate  through the economy, but they are not the whole of the economy. The reduced affordability driven by housing costs will have an impact on the entire region; according to a June article in the Denver Post:

“Colorado is on the verge of an affordable-housing crisis so severe that it could derail the state economy and contribute to a significant deterioration in the quality of life for those priced out of the market.”

Most articles on the subject of affordability seem to be either written about for-sale homes, or apartments. So we decided to look at both, as well as earnings, to provide a broader picture.

Zillow’s August data for Denver points to a 13.2% increase in median home prices year-over-year. The National Association of Realtors claims it is 18%, and a recent Reuters article (S&P CoreLogic Case-Shiller data) pegs it at 23.6%! Let’s stick with Zillow’s more conservative figures for our analysis since the start of our decade-long economic boom:

Since the end of the Great Recession, median home prices have increased 150%. There was a 63% jump during 2011-2016, and in just the past year and a half, another increase of 28%! And, it’s not just that the median home price is $600k, but also that there is very little availability, in any condition, in any neighborhood, for under $400k. In fact, a Zillow search today yielded ZERO single family homes for under $350k in the entire Denver metro area! There are many reasons for the skyrocketing home prices:

While lack of construction has been a culprit of inflation in the single-family home market, that has not been the case with for-rent product.

According to the Apartment Association of Metro Denver, over the past four years (’16-’20) 56,736 apartment units have been delivered (72,165 units if you include ’14 & ’15). This rate of production far surpasses the previous boom years of ’83-’87, the oil and gas boom (38,700 units), and ’99-’03 tech boom (36,053 units). However, during those previous two cycles a crash immediately ensued. This was due to overbuilding with sharply declining rents and vacancy rates approaching 20%. That type of swift “correction” does not appear likely to repeat during this cycle, as vacancy is still very low and rents keep increasing.

August data from Apartments.com reveals that Denver rents have increased 12.8% since the start of the pandemic and 14.4% year-over-year. (Sidenote: Colorado Springs has increased 22% year-over year). Looking at the same years as above for median rental rates:

While rents did recede a bit during the beginning of COVID, and two-month concessions were widely available, especially in newer buildings, occupancy remained strong (even though many were not delinquent in paying rent).  This past spring and summer prices and leasing activity began to surge again. While not as dramatic as the single-family home price increases, rents have still increased 55% in the past decade and 10% in the past year alone.

The impact of the above housing cost increases really come into view when comparing them with the median household income of the Denver area over the past decade (slightly different timescale due to reporting data):

In November 2017, CNN Business published an article, “How Colorado became one of the least affordable places to live in the U.S.” And just this month, the National Association of Realtors named Denver the 14th least affordable metro area of the top 200 metro areas in the nation, with a 30% increase (or decrease) in their affordability index one year! All of the cities ranked above Denver were the usual suspects: California cities, NY/CT cities, Honolulu, Seattle, Boston, Boulder, etc. 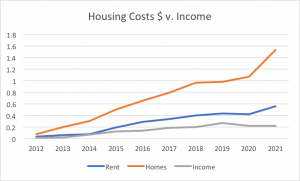 Is Affordability a Problem?

Despite all the press about the population surge in Colorado, there is evidence of an outflow of millennials who can’t afford Denver after a few years.

Our sister companies, Boutique Apartments and Wheelhouse Apartments, manage over 5,500 apartment units in the Denver Metro area. An analysis of our data from the past two years found that 20% of tenants who moved out of an apartment moved out of state.

That may not be a huge number, but I can also tell you from both my personal experiences and from anecdotal evidence from the apartment managerial and leasing teams, that many of the young people are moving out because they simply cannot afford to take the next step in their lives in Colorado – buying a house and raising a family.

One couple, a nurse and a teacher, were moving back to Cedar Rapids and put it like this: “We are both going to get a 20% raise, and can buy twice the house for half the money, and we’ll be able to afford to fly out for quick ski trips.”

There is no doubt that Denver is and will remain an enticing place to relocate to. We have all read the endless articles about the millennial migration to Denver for the lifestyle. And it’s true that we currently have the second most educated population in the US (Boston is #1). Denver has firmly established itself as a top Second Tier City (First Tier being the coastal markets and Chicago).

But our new elevated status is not going to be without growing pains. The office brokers are probably correct – it will be difficult to attract large employers when competing with other second-tier cities like Charlottesville NC or Louisville KY, with median home prices of $267k and $211k respectively.

The question becomes: Will we be able to retain the educated millennials who come here to work hard and play hard, when it’s just so darn hard to just live here?

I don’t have the answer, but believe it will be challenging for all industries outside of high-paying sectors such as tech and financial services.